How to work with TikTok Influencers?

How to work with TikTok Influencers?

Request your data now
By clicking "Submit", you agree to our Privacy Policy
TikTok is a helpful platform for promoting your account or brand. The statistics show that the platform has 689 million monthly active users worldwide (DataReportal, 2021). That makes TikTok the seventh-largest platform, ahead of others that have been around much longer, such as Snapchat, Pinterest, and Twitter.

2. What kind of brands to promote on TikTok?

3. What is the audience on TikTok?

5. How to choose a TikTok influencer for collaboration?

7. How much does it cost to cooperate with a TikTok influencer?

8. How to negotiate cooperation with a TikTik influencer?

9. How to create outstanding content for your marketing campaign?

Why promote a brand on TikTok?

The main benefit of TikTok for business is its reach. At the same time, it is wrong to consider TikTok as the only tool for promotion. After all, it should be a part of the brand's global marketing strategy. TikTok is a great way to increase the company's awareness. The social platform can be an excellent alternative for advertising: people see the brand not on a banner but in a live video feed. 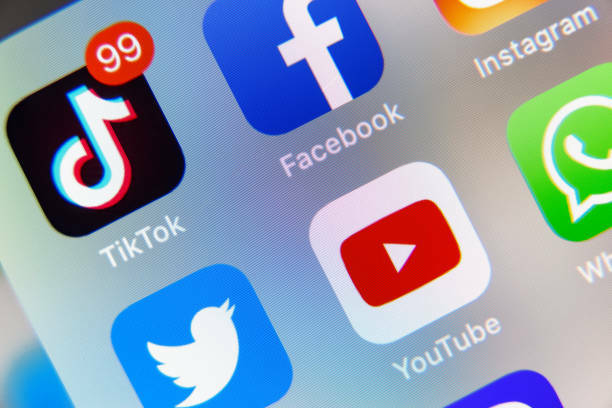 What kind of brands to promote on TikTok?

B2B, with a narrow audience, shouldn't promote their products on TikTok. Still, TikTok is more suitable for general goods, primarily B2C. In short, TikTok marketing is worth trying for retail and all companies that sell goods at retail. TikTok is also a good platform for promoting info courses and expert consultations, books and films.

B2B can also promote their products on TikTok if it sells something small with an average check of $250-400. But if you sell products that cost more than 1200 USD, it won't be easy to attract customers on this social network, although it depends on the industry.
What is the audience on TikTok?
Some people think that TikTok users are only schoolchildren and students, but of course, this is not entirely true. Half of the TikTok users are over 18 years old, and about 25% are 25-35-year-old people. Some TikTok users are over 35 years old. TikTok's audience is solvent, educated, and intelligent. At the same time, TikTok adjusts the feed to the user's interests. If the users don't watch teenagers dancing and monkeying, such content will stop appearing in the feed. Instead, the platform will display informative and helpful content. 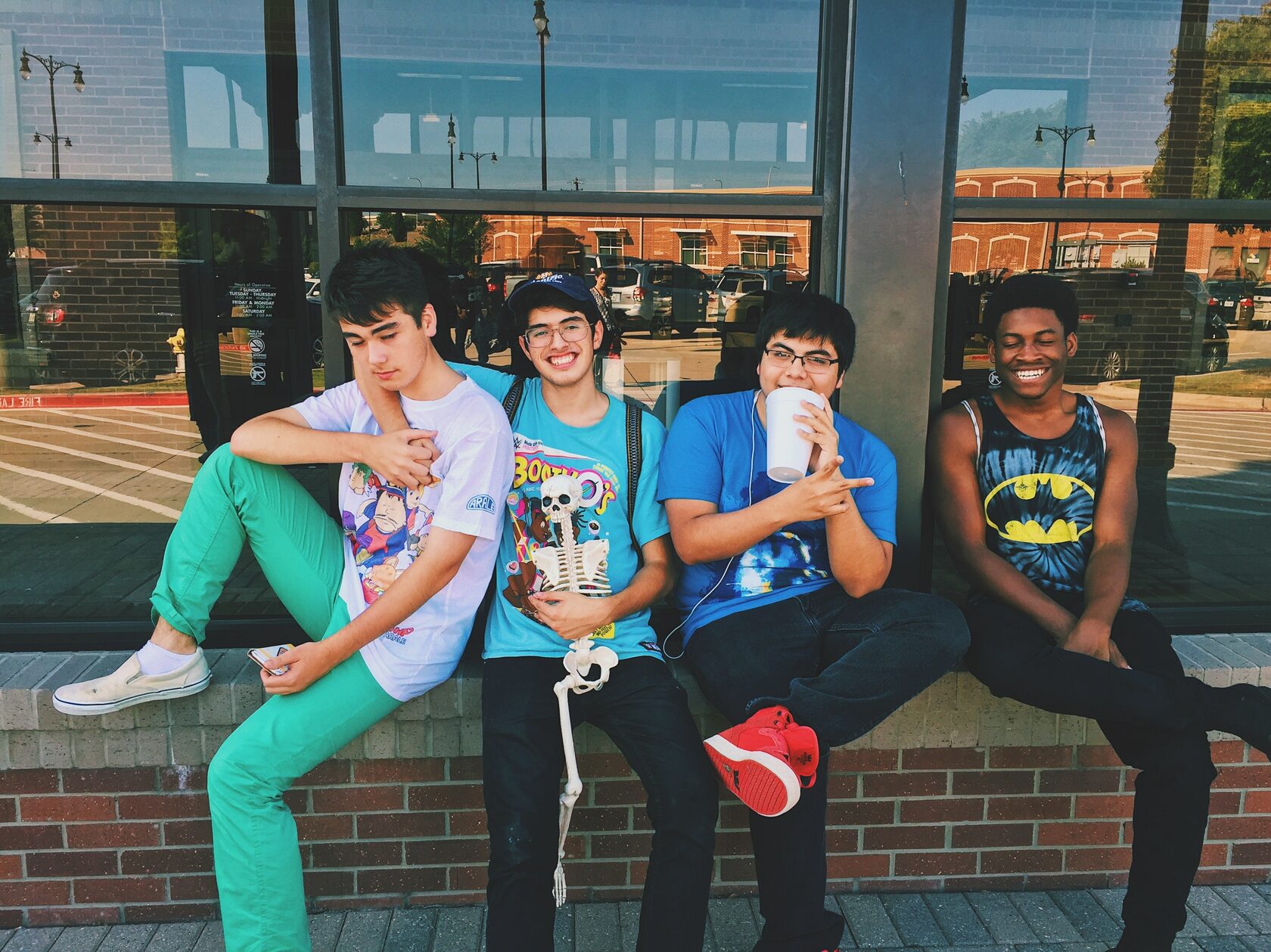 TikTok advertising opportunities
Hashtag Challenge
Challenges are one of the most effective ways to promote your brand on TikTok. The mechanics are pretty simple: famous TikTok bloggers launch a challenge with your product. Their followers, in turn, need to record a similar video with specific music and post it on their profile with a hashtag mentioning your brand. Such a video can gain up to 500,000 views and appear in the recommendation feed. Once it happens, other TikTok users join the challenge.
In-Feed Native Video
The promotional video appears in the TikTok user's feed, among other content. It lasts up to 15 seconds, can be accompanied by a call to action, link and hashtag.
Branded masks and stickers
This ad format resembles Snapchat masks. Branded content will appear in key locations throughout the app.
Collaboration with TikTok influencers
TikTok bloggers can help you promote your products by launching a challenge or creating a video with your product. Let's dive into details and find out how to work with TikTok influencers.
How to choose a TikTok influencer for collaboration?
1
Define the tastes and interests of your audience. If you're going to promote cosmetics, youth clothing, food and drinks, you've come to the right place.
2
Find bloggers whose content matches the interests of your target audience.
3
Examine the quality and quantity of comments in the influencer's account. If a blogger buys followers, there will be few reactions to the content, and the comments will be short and meaningless.
4
When choosing your top TikTok influencer, don't focus on the number of followers. A more important indicator in TikTok is the ratio of comments and likes to regular and sponsored posts. For example, a blogger with 15,000 followers and an influencer with 150,000 ones may have the same number of reactions. The more activity in the influencer's profile, the more benefits you'll get from advertising.
TikTok analytics
Internal analytics of TikTok provide little data and also doesn't allow analyzing third-party accounts. Before promoting your brand on TikTok, it is essential to audit competitors, prepare for an advertising campaign and collect detailed statistics. Before cooperating with a TikTok influencer, we recommend you to ask the influencer to provide you with the statistics of their TikTok account. In this way, you'll have a chance to predict the promotion results and decide if the collaboration is worth your budget.
How much does it cost to cooperate with a TikTok influencer?
The TikTok advertising market is relatively young. The ad services' prices can be completely different and, in some cases, surprisingly high. Prices are often not tied to the number of followers and don't have any justification. If you work with a TikTok influencer with 20 million followers, you will have to pay $3,000 for advertising. You can always negotiate a free barter promotion.
How to negotiate cooperation with a TikTik influencer?
Some TikTok influencers have managers who help them cooperate with brands. First of all, check if the blogger has shared the manager's contacts in their profile. If not - try to contact the influencer directly. Note that the influencer may not get in touch for a long time due to numerous messages or forget to answer you.
How to create outstanding content for your marketing campaign?
The style of ad integrations on TikTok differs from the ones on Instagram or YouTube. No matter how bad a marketing campaign on Instagram is, it will still gain its views. But on TikTok, every video ad must entertain the audience to gain success. Remember that the primary goal of the user in the app is to relax. So, even if your product is super-serious, you need to give the blogger the task to present it creatively. Here are helpful tips for creating a great video ad on TikTok:
Let the influencer come up with the beginning of the video.
It should look like a standard start for all their videos. If the influencer's followers understand that this is an ad, they won't watch it. Techniques for keeping followers' attention in the first three seconds of the video ad include yellow headers, a question to the follower, or an action that provokes a question.
Keep the viewer's attention during the whole video.
Keep the viewer's attention during the whole video. It should be a fifteen-second Hollywood movie that is natively related to your product. For instance, the product can help the influencer to solve a problem.
Don't spoil the ending.
You've probably seen creative video ads that are interesting at first. Still, in the end, something happens that is entirely unrelated to the main plot but aimed only at advertising. For example, the action took place on the street, and the plot led to the ending. Still, at the end of the video, the blogger appears in entirely different clothes at home and says something like: "By the way, my followers can get a discount in the company X ... ".

Such video ads came from Instagram, where they work, though causing adverse reactions. On TikTok, however, nobody will watch such an ad. If you created an 18-second video, and no one is watching its last 3 seconds because of the ad, it won't gain many views. This is how algorithms in TikTok work, and there is nothing you can do about it. Therefore, the entire video should look like one whole.
Let the influencer create the ad as they wish.
If you intend to conduct an advertising campaign on TikTok, you should not give all bloggers the same task. Each TikTok influencer has their presentation style. It was this style that helped the blogger attract the audience. Therefore, when collaborating with a blogger, you should give them the freedom to create an attractive ad.
Examples of successful collaborations with TikTok influencers 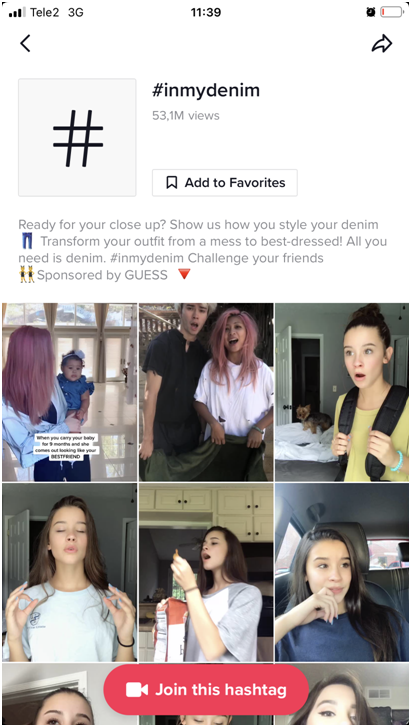 In 2018, Guess built a successful chain of collaborations with popular TikTok influencers. Bloggers launched a transformation challenge - they created a video with the hashtag #inmydenim. They first showed a comical image in old clothes and then changed into Guess clothes. The challenge gained momentum among ordinary users. In total, the challenge covered an audience of 30 million people. 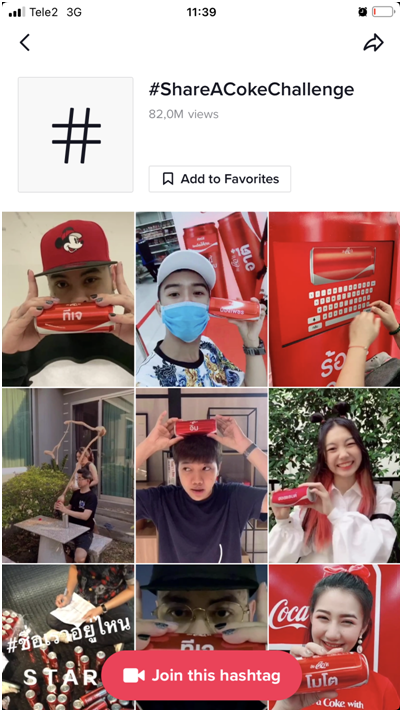 Another successful case is the #shareacokechallenge from Coca-Cola. It generated 900k videos from their target audience created for the challenge, with a combined 200m views. 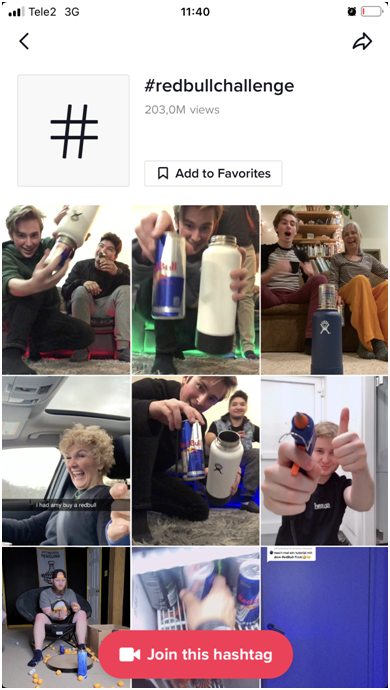 The Red Bull Challenge attracted nearly 36 million users. Find videos with #redbullchallenge to learn more about the campaign.
To sum up
The style of ad integrations on TikTok differs from the ones on Instagram or YouTube. No matter how bad a marketing campaign on Instagram is, it will still gain its views. But on TikTok, every video ad must entertain the audience to gain success. Remember that the primary goal of the user in the app is to relax. So, even if your product is super-serious, you need to give the blogger the task to present it creatively. Here are helpful tips for creating a great video ad on TikTok:
FEEL FREE TO CONTACT US
[email protected]
Email: [email protected]
Messenger (FB): m.me/finddatalab
Sign up for our newsletter
Get new ways to get data and special offers in our news
Subscribe
© 2020 FindDataLab